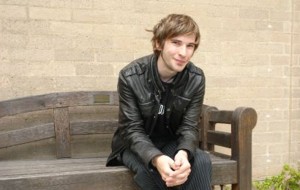 The Soundsphere magazine Editor has been nominated alongside seven other individuals to bear the flame as it arrives in the city – its hub destination for Yorkshire and the Humber – in the afternoon.

Part of the journey will involve Dom accompanying the lantern on an accessible bike as it travels from York Minster to an out-of-town sports complex, where a celebratory day of disability sports will occur throughout the day.

Speaking about his role in the day’s proceedings, Dom, who is also a lead partner in the Disabled Entreprenuers support network, says, “It’s an absolute honour and a privilege for me to be nominated to travel with the flame for York’s Celebrating Ability day. It’s a once in a lifetime experience, and I feel very lucky! Thank you! I hope to see loads of people there!”

Already, Dom’s participation in the Paralympic Lantern relay is making news in the city:

As you can imagine, everyone at The Creative Condition is absolutely proud of Dom’s involvement in this prestigious occasion, and with Dom in contention for a National Diversity Award for Entreprenueral Excellence next month, it’s indeed a golden moment truly worthy of championing.

Our community Manager Colm will be among the crowds cheering on everyone taking part in tomorrow’s celebrations, and we hope to bring you coverage of how the relay went next week.

More information about the Paralympic Lantern’s route in York and Celebrating Ability Day is on the City of York Council website.

UPDATE, AUGUST 31: You can watch and hear about Dom’s experience on the day of the Paralympic Lantern Relay in York by visiting our Facebook page.