We are pleased to announce the release of Digicore‘s new animated video for ‘You’re Not Like Me’, track two off the new album ‘More Than Just An Ape’. 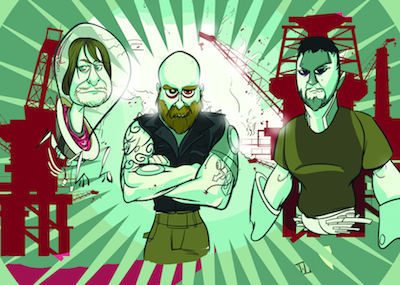 Vocalist, guitarist, and songwriter Danny Carnage comments: “The song is about alienation, and that constant struggle that some people face just being a part of a world that many take for granted. I wanted to explore the commonly held belief that it’s the system that’s broken, and ask the question: What if the system is fine, and it is really me that is broken?”

Taking the sci-fi and abstract elements of Carnage’s idea, artistic director of The Creative Condition, Jay Sillence has this to say about his project: “I was immediately inspired by Dan’s idea. My mind went to ‘2000 AD’, ‘Heavy Metal’ and ‘Tank Girl’ as well as a lexicon of 80s sci-fi movies.” Jay drew everything by hand, and then it was digitally coloured, composited and animated. “The challenge was creating an entire comic book from scratch and making it move, but it was different to anything I’ve done before, and really was the perfect project.”