Pretty cool, huh? Yeah, that’s right. Creative Condition team mates Dom Smith and Jonathan Sillence (alongside Team Fandangmo mates Anthony Neylon and Dan Chapman) raised a total of £147 this Movember. Individually, Jonathan deserves a special mention for his raising £40.33 on his own personal profile, with Dom raising £23.33. All details at the links. 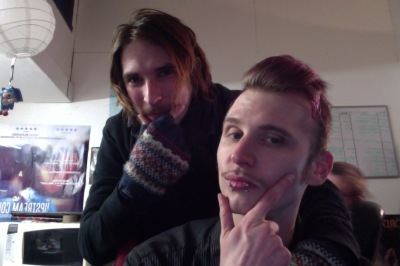 Movember challenges men to grow a moustache for the 30-days of November, thereby changing their appearance and the face of men’s health.

In October, Mo Bros sign up at Movember.com, and on the 1st of Movember, with a clean-shaven face, start their Mo growing journey.

Then for the entire month, these selfless and generous men known as Mo Bros, effectively become walking, talking billboards for 30 days. Through their growing efforts they raise awareness for the often ignored issues of men’s health, by prompting conversations wherever they go.

Another crucial part of being a Mo Bro is to raise funds for men’s health. Men donate their face, and much like taking part in a run or a walk for charity, ask their family and friends to sponsor their efforts.

Movember’s not just for men. The women of Movember, are known as Mo Sistas. They play a vital role in the success of Movember by supporting and encouraging the men in their life to get involved. Mo Sistas also get involved by signing up at Movember.com, and participate by raising funds and awareness themselves. Essentially, Mo Sistas do everything that Mo Bros do, without a Mo. More about Mo Sistas here.

At the end of the month, Mo Bros and Mo Sistas celebrate their Movember journey by throwing their own Movember parties or attending one of the official Gala Partés held around the world.