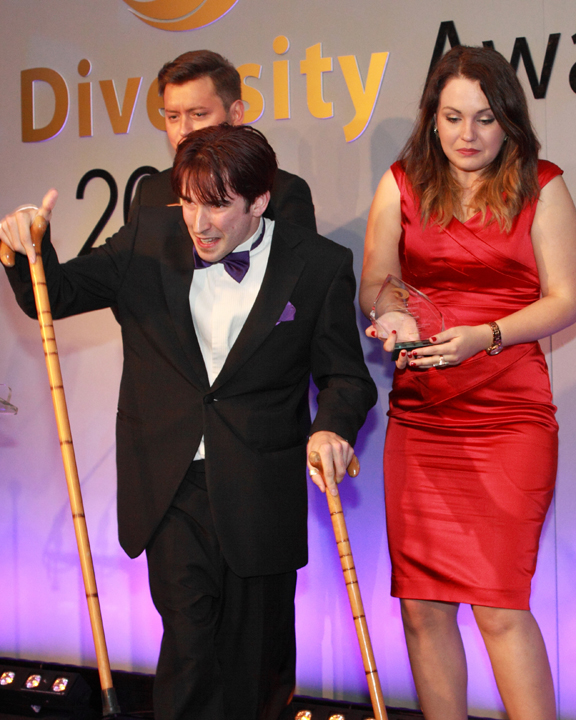 Hull-born and York-based disabled entrepreneur Dom Smith (editor of Soundsphere magazine and co-founder of Disabled Entrepreneurs), has won the National Diversity Award for Entrepreneurial Excellence in the Disability category for 2012. The first ever NDA ceremony was hosted on September 21 of this year by Brian Dowling (Big Brother) at Manchester’s Midland Hotel. Dom (who has Cerebral Palsy and walks with the aid of two sticks) was one of three shortlisted candidates for this award.

“I am still stunned,” he says. “It was such a wonderful experience. There were some amazingly inspirational people associated with the awards, and it was pretty much the coolest feeling in the world to be involved alongside them. To win was just awesome!”

With a background in online and print journalism (he graduated from the University of Central Lancashire’s Masters in Magazine Journalism in 2008 and went on to intern and work for respected publications including Rock Sound, NME.com and T3). Dom set-up Soundsphere magazine and it has since grown from a diverse website showcasing local music around Yorkshire into one of the leading print and online music magazines in the North of England working with national and international artists. He also co-founded The Creative Condition, a media agency that supports a range of sectors within the creative industry by providing content and media production services, and is one of the Disabled Entrepreneurs team who works to support those who have physical and learning difficulties to start-up in business.

In its first year, the National Diversity Awards’ aim was to recognise and reward positive role models, entrepreneurs and community organisations from a grass roots level for all their hard work within their respective communities.

The event itself was unique, and rewarded all aspects of diversity within one ceremony including Age, Disability, Gender, Race and LGBT. This has attracted endorsements from celebrities from the likes of Stephen Fry, Brian Blessed, Ade Adepitan and the stars from My Transsexual Summer along with several Paralympians such as Jody Cundy, Claire Hardy, and Danny Crates.

The National Diversity Awards 2013 will be held in Leeds at a date to be confirmed.