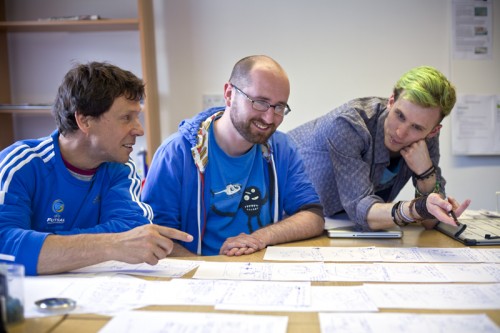 Our Artistic Director, Jonathan, is putting his talents to use on a project gestating at our current home, The Phoenix Centre, which involves another creative company based there.

The website, described by developers as “a platform which will provide businesses with a simple way to access resources locally”, is co-ordinated by York St John University, Science City York and the Higher York consortium as a JISC (Joint Information Systems Committee) project; essentially to promote the use of digital technologies in academic research, learning and teaching.

Explaining his take on the project, Jay says: “We’re working on a two collage-style animations: one involves the Chancellor of a university who’s trying to save a bit of money, but also help the students out to get what they want – and the second one is from the student’s point of view, trying to get what they want and how they can connect with the Chancellor to make it happen.”

Jay adds that the process of working with Spinning Top is a landmark project and he’s looking forward to the final product: “We’ve been batting around some ideas, and currently we’re doing some storyboards and concept work, and in the next couple of weeks we’ll be animating the whole thing.”

You can find out more about The Infusion Factory at its currently-developing website, where the two films Jay and Pete are working on will be available to watch in the near future.